» PRETORIA » INSIDE OUR CHURCH

On Saturday, February 23, more than a thousand Scientologists and their guests assembled to celebrate the opening of the new Church of Scientology Pretoria. National, provincial and city dignitaries as well as South African royalty joined Church officials for the dedication ceremony. 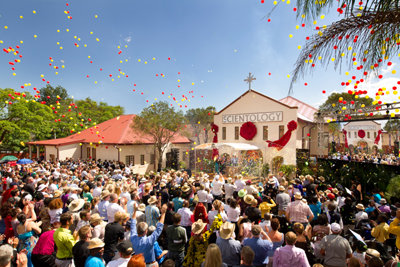 More than a thousand Scientologists, dignitaries and guests celebrated the opening of the new Church of Scientology Pretoria on Saturday, February 23, 2013. The Church stands on Stanza Bopape Street, just steps from Embassy Row and the Union Buildings, the seat of South African government.

The Church’s new home stands on Stanza Bopape Street neighboring the Union Buildings, official seat of the South African government and home to the presidential offices. The campus, less than a block from Embassy Row, is comprised of five heritage homes originally constructed at the turn of the 20th century. The Church meticulously restored the Edwardian-style buildings and altogether transformed them into a 21st century Ideal Organization (Ideal Org) to accommodate an ever-growing congregation.

In honor of the occasion, Mr. David Miscavige, Chairman of the Board Religious Technology Center and ecclesiastical leader of the Scientology religion, stated: “Today we open an Ideal Org on sacred ground, for it was here at the veritable summit of South Africa that freedom was claimed for so many. And just as the sun shall never set on so glorious a human achievement, it shall never set on our own work until that freedom is realized by every last soul in the land. So yes, with this new Church, we rededicate ourselves to carry on the work L. Ron Hubbard began in this nation and so fulfill his prediction that ‘from Southern Africa will spring the next great civilization on this planet.’”

ANC Chief Whip Dr. Mathole Motshekga invoked the African idea of Ubuntu (meaning “I am because you are, you are because we are”) in welcoming the new Church to Pretoria: “May today herald the beginning of a beautiful friendship—one that forges the South African spirit of Ubuntu that governs our nation’s development and brings about a marriage of social and spiritual development that our icon Nelson Mandela envisioned for our future.”

Director of Programs for South Africa’s Constitution Hill, Mr. Thabo Madisa, spoke of L. Ron Hubbard’s legacy in South Africa: “Your founder was a great man. After all, he wrote a constitution of equality for us when our heroes were calling for one, but their calls were not heard. And thus he held out a hand to our people when all that was offered was a fist. There is no freedom without human rights. And there are no human rights without a vanguard there to protect them. This Church is a citadel. It stands here in the name of L. Ron Hubbard to carry through on what he promised. And we promise to work with you, to guarantee that this Rainbow Nation will walk tall forevermore.”

Thembu royal, Prince Unathi Mtirara, highlighted The Way to Happiness, a common sense guide to living authored by L. Ron Hubbard: “The Way to Happiness speaks Xhosa, Zulu and Afrikaans—its language is universal. My grand uncle, Former President Mandela, has said that if you give a child a book to read you’ve given them everything that they ever need. That is why I want to get a copy in the hand of every child in this land. We need this in every street of Johannesburg, in every school in Cape Town — I want it all for South Africa.”

Coordinator at the Department of Education, Gauteng, Ms. Theodora Mohale, addressed L. Ron Hubbard’s tools for learning and literacy: “I know that through the use of Study Technology, you are providing skills to create the lifelong learners our country needs. And therefore, you are in perfect harmony with our aims at the Department of Education. This new Church must be celebrated as an opportunity for us to work together and make great strides in basic education for all children in South Africa.”

Regional Commissioner for South Africa’s Department of Corrections, Mr. Alfred Tsetsane, spoke of his continuing partnership with the Church-sponsored Criminon criminal rehabilitation program: “With conditions of our facilities, rehabilitation of offenders and safety a constant challenge, there is much still needing to be done. I came to know about the Church of Scientology as I witnessed the implementation of the Criminon program. This program has produced remarkable results in the rehabilitation of offenders.”

National Coordinator, Humanity’s Team South Africa, Anna-Mari Pieterse, said of working with the new Church: “L. Ron Hubbard well recognized the inherent potential in our South Africa. And it is my wish and belief that this new Church of Scientology, with its humanitarian programs and solutions available to one and all, provides the opportunity for the people of this city and nation to realize their full potential.”

The new Pretoria Church provides residents of Tshwane with an introduction to Dianetics and Scientology, beginning with the Public Information Center. Its displays, containing more than 500 films, present the beliefs and practices of the Scientology religion and the life and legacy of Founder L. Ron Hubbard. The Information Center also offers a detailed overview of the many Church-sponsored humanitarian programs—including a worldwide human rights education initiative; an equally far-reaching drug education, prevention and rehabilitation program; a global network of literacy and learning centers; and the Scientology Volunteer Minister program, now comprising the world’s largest independent relief force. The Center is open morning to night for visitors to tour at their leisure and return as often as they wish.

The Church’s Chapel provides for Scientology congregational gatherings, including Sunday Services, Weddings and Naming Ceremonies—as well as a host of community-wide events open to members of all faiths. The new Church further includes multiple seminar rooms and classrooms, in addition to dozens of rooms for Scientology auditing (spiritual counseling).

Ideal Orgs reflect the fulfillment of Founder L. Ron Hubbard’s vision for the religion. They not only provide the ideal facilities to service Scientologists on their ascent to greater states of spiritual awareness and freedom, they are also designed to serve as a home for the entire community and a meeting ground of cooperative effort to uplift citizens of all denominations.

The Scientology religion was founded by author and philosopher L. Ron Hubbard. The first Church of Scientology was formed in Los Angeles in 1954 and the religion has expanded to more than 11,000 Churches, Missions and affiliated groups, with millions of members in 167 countries.

Take a tour and see our multimedia displays